A couple of weeks ago, I found an elderly and slightly distressed Paddington Bear at a local fundraiser. He was lurking at the back of a second hand toy stall, among the games and miscellaneous bits of brightly coloured plastic. I took him home with me in in a big shopping bag, along with some second hand books and CDs, a bag of home grown vegetables and a few other purchases. These included, appropriately enough, a pot of home made marmalade. 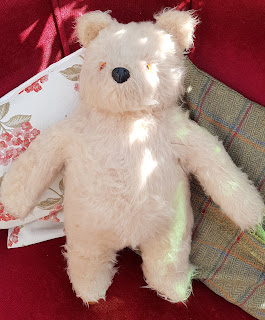 That's him on the left, in his birthday suit. He still had his duffel coat, minus a couple of toggles and his hat, minus its traditional safety pin, but his wellies were missing. He was a bit musty smelling, as though he had been stored away somewhere, but he seemed to be in pretty good condition.

I recognised him for what he was immediately: a Gabrielle Paddington Bear, for the simple reason that I have one of my own, bought for me by my parents on my 21st birthday. The label confirmed it. My Paddington is one of the original bears, whereas this one is a bit newer and it was instructive to compare the two - both lovely bears, but I think my original just edges it in terms of quality of mohair, and a few other small details that you only notice when you see them side by side. My older bear is on the right in the picture below, and you can see that the mohair is thicker, the feet pads smaller, the nose just a little longer. My own bear, because he was bought for an adult, still has his original 'please look after this bear' label, tucked into his pocket.


I decided that my precious Paddington could do with a little clean up as well, so I worked on both of them at the same time. I should caution here that these bears were in pretty good condition. They're nice, solid bears. If you're going to attempt anything too ambitious on an old and potentially valuable bear, seek professional help! But I've added some advice about cleaning old bears in a static post since it's something people often ask about, and I've learned a lot from customers over the years.

I checked them over for moth eggs - none. Fortunately, this isn't a problem that we see a lot, living in a cold old house in chilly Scotland, but clothes moths can be a challenge. I cleaned them with foam from a gentle fabric cleaner, being very careful not to get them too wet. I dried them and brushed them and brushed their clothes.

I got out my old button box in search of the duffel coat 'toggles' I knew I had in there. They were the wrong colour, so my husband varnished them to exactly the right shade, to match the two already in place.

I bought, a pair of old Dunlop wellies of exactly the right type and size on eBay. I found a safety pin for his hat. And I wrote out a little label for him too.

The only thing missing is the marmalade sandwich under his hat, for 'emergencies'. He's sitting here beside me as I type this. I'll be re-homing him soon, aka selling him, so you will find him in my eBay shop. It took a day's work and some additional expense for his boots, but I think it was worth it, don't you?