The Pound Shop Amelanchier - Gardening on the Cheap 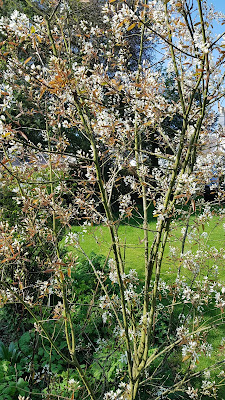 Our amelanchier tree is in bloom right now and every year at this time, I'm struck by how pretty this little tree is, the blooms so delicate. Later in the year, there'll be tiny berries, although they won't stay long, because the birds love them too.

Gardening needn't be expensive. Most of the plants in our less-than-well-manicured garden have been donated by friends, bought on the cheap at various village events or boot sales, (gala days generally have plant stalls) grown on from seed or 'rescue plants' bought from those shelves in garden centres and supermarkets where they sell the poor stragglers, half dead plants for half price or less.  Except that with a modicum of TLC you can usually rescue them.

Mostly it's just a case of repotting or replanting. Most of these geriatric plants will simply be pot bound so you should tease out the roots a little first. Many of them will be past their blooming season, but still good plants, so if you can be patient until next year, they will be a very good buy.

Try feeding, watering, (but not too much) and dead heading. I'm not hugely knowledgeable even though I love my garden, but I've found that most plants respond to a bit of care and attention and if you're not sure, there are plenty of specialist sites online. Oh and not too much water.

I know more people who kill plants with kindness than in any other way.

I do buy some trays of annuals in spring so that I'll have a good and fairly instant display of tubs and pots. Earlier this year I succumbed to the appeal of a few plug plants and brought them on myself in the conservatory, although I'm always a victim of my inadvertent green fingers and they're already too large for the time of year. There's no way they can be put outside for the ground frosts to kill. So I have to cart them outside every morning and then remember to bring them in at night!

Another good source of plants can be your local pound shop. In among the usual suspects, stacked on shelves outside, you may find something special. The amelanchier in the picture was bought as a small, rather bedraggled specimen, for a pound. It took a while to get going, during which I let it settle in, pruned it a bit, but essentially left it in peace. And then one year, it simply took off.
.
It's a slow process though. If you want speed and an instant garden you'll probably have to pay for it. On the other hand, watching something grow and flourish from unpromising beginnings is one of the real pleasures of gardening. And it needn't cost a fortune.
200 year old garden 200 year old house amelanchier cottage garden garden gardening gardening on a budget. Scotland