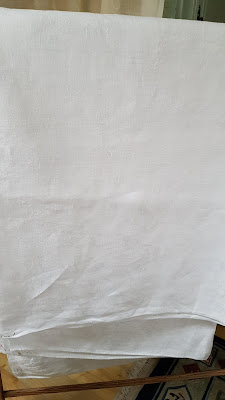 Every now and then, in my hunt for old and interesting textiles, I come across something really special. This 200 year old tablecloth, which I'm currently selling on eBay, was no exception: part of an extraordinary lot of table linens that I bought at auction a few years ago and have been laundering and selling ever since.

These table linens were part of a huge collection of old Irish linen damask tablecloths and napkins that had been stored away in an Ayrshire country house – although I don’t know which one. The Eliza Ellice whose name is woven into or written on some of the napkins and cloths was born in 1817 or 1818 and her parents were Miss Elizabeth Stewart and Thomas Campbell Hagart of Bantaskine, Stirling.

Elizabeth Stewart – a celebrated beauty of that day - was the daughter of Thomas Stewart of the ‘Glasgow field’, who was a Calico Printer – a lucrative trade in those days when brightly printed cottons were much in fashion. She was sometimes referred to as ‘the beautiful Miss Stewart of the Field.’ I haven’t been able to find out exactly what the ‘field’ was, but it may have been a bleach field, given the textile connection.

The industrial revolution was well under way in the west of Scotland and some of the older tablecloths must have belonged to this beautiful Miss Stewart who became Mistress Eliza Hagart. These Georgian cloths either have the initials EH or the name Eliza Hagart written on them - and this, one of the oldest in my possession, was one of Eliza's cloths. 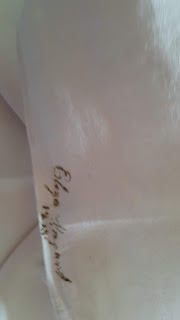 Their daughter, Eliza Stewart Hagart, was also reputed to be a great beauty. Her first marriage was to Alexander Speirs, MP for Richmond, on 26th June 1836. Alexander’s mother was Margaret Dundas, who was born in 1772 and who died in 1852. The Dundas family were very powerful and had a high political profile. Margaret was the daughter of Thomas Dundas, 1st Baron Dundas, who commissioned the first practical steamboat: the Charlotte Dundas. A few of the linens in the whole collection have Margaret’s name on them so it’s clear that the linens were precious and passed down through the family.

Eliza and Alexander Speirs had 2 children, Archibald and another Eliza. Archibald, became a politician, but died while still young. The daughter, Eliza, married one Colonel Alexander of Ballochmyle, which is the only Ayrshire connection I can find to these linens. Alexander Speirs died in 1844 at the age of 39. Eliza Stewart Speirs, nee Hagart, remarried in 1867. Her second husband was Edward Ellice, a Scottish liberal politician. He spent time in Canada and took a special interest in the reform of the Poor Law. He declined a peerage. Eliza would have been 50, and Edward, who was born in 1810, was 57 at the time of this marriage. Many of the linens – very ‘grand’ cloths, seem to date from around the time of their marriage or soon after – they clearly did a great deal of entertaining.

Many of the linens were Eliza’s special possessions, possibly even commissioned by her or inherited. There are some Hagart cloths, as well as some with ESS and some with ESE initials, which seem to date them as belonging to her when she was Eliza Stewart Speirs and then, later, Eliza Stewart Ellice. Occasionally, though, there are AEMH initials, which clearly belonged to her younger sister, Ann Elizabeth Molineux Hagart who was born in 1819 and died in 1895. I’ve been unable to find out whether Ann ever married. Some of these AEMH napkins and cloths date from the 1870s, so perhaps not – and it would also explain why all the linens were part of the same collection: unmarried daughters tended to stay at home.

If you're interested in buying and selling antiques and collectibles in general, why not have a look at my eBook on the subject: Precious Vintage - a beginners' guide, packed full of hints and tips. 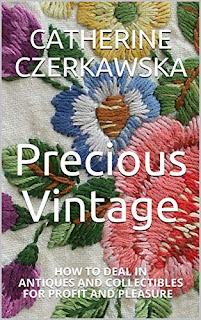