A Robert Burns Miniature, With a Secret: Featured Antique.

There's a shelf in my office, here in the 200 year old house, devoted to Scottish poet Robert Burns. That's because I've written a book about his wife, Jean Armour, (The Jewel), and also collated and edited a selection of the poems and letters he wrote with his wife in mind. (For Jean). So for a couple of years, I thought about Burns and his milieu almost every day. I'm still working on another Burns project, although I'm only half way there with it, so more about that later, on my author blog. 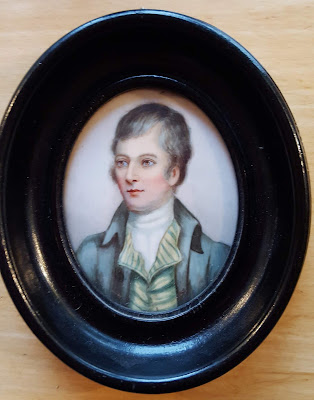 Meanwhile, I've amassed a lovely little collection of Burns memorabilia, which you can see in the picture at the top of this post. There are a few pieces of Mauchline Ware which I'll write about later, because it deserves a post all of its own. These include a needle-case, a box in the shape of a cottage, a cradle and a pincushion, most of them labelled 'bought in Burns Cottage'.

There's a fabulous Staffordshire flatback, a very welcome gift from a friend. I think it's meant to be Burns and his Highland Mary, but since she was fair and Jean was dark, we can pretend that it's Rab and Jean. I have several very old books of his poetry and even an antique pen knife with the poet's image. But perhaps the most intriguing item of all is this very old but unsigned ivory miniature of the poet, beautifully painted after the Nasmyth Burns, I think. This is a very old object, and probably dates from the years immediately following the poet's untimely death on 21st July, in 1796, in Dumfries.

Here, as you can see, the poet is painted very much as a romantic hero and I can just imagine some regency heroine like Jane Austen's Catherine Morland (one of my favourites) treasuring it and sighing over it. I don't think he was ever as finely drawn as this would suggest - after all, he worked out of doors for much of his life, either farming or riding some 200 miles a week as an exciseman. But he was undoubtedly attractive.

What is really intriguing though, is the reverse, where there's an old handwritten label. It reads Robert Burns, Ivory Miniature, in a neat hand, and is glued over a covering of some kind of scrim, held in place top and bottom with two large wax seals. I find myself occasionally looking at it and wondering if there might be a lock of the poet's hair in there! Fanciful, I know, but stranger things have happened. I even took it to my dentist, to ask if he could x-ray it for me, but he told me it wouldn't show up. And I don't want to dismantle it.

So I'm left speculating. Somebody once treasured this as much as I treasure it now. But was it because she had been more intimately associated with the poet than I could ever be? 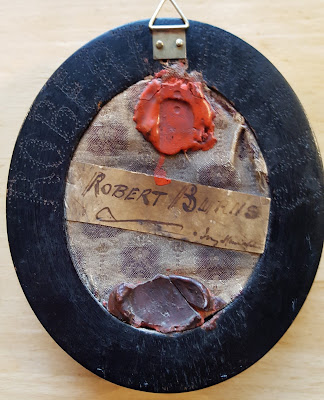