Our Village: A Small Corner of Lowland Scotland.

We're lucky enough to live in a small village in the Scottish lowlands, one where - fortunately - the planners slapped a conservation order on the whole central area before it could be destroyed. We have lost so much to casual demolition in this country, witness the wholesale destruction of houses that dated back to mediaeval times in nearby Maybole. Let's hope when the new Maybole Bypass is complete, the surviving centre of that town will be renovated and treasured once more.

The two hundred year old houses in this village were mostly weavers' cottages, and this was a weaving village, although it also provided accommodation for some of the people who worked on  neighbouring dairy farms, and all the small industries that serviced them: blacksmiths, butchers, bakers, shoemakers, tailors, thatchers and so on. This was a big parish.

There was a manse too, as there still is. The present building is fairly new, the 'old manse' - now a private house - is a Victorian building, but there are interesting records of a much older and smaller house somewhere on the site. And there were alehouses. When I first moved to the village in 1980, there were two pubs: the McClure Inn and the Kirkmichael Arms. Now, there is only one, the Kirkmichael Arms, full of character, and serving very good food. But in earlier times, there would have been many more than that. 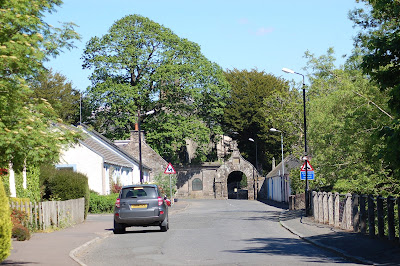 The kirk itself is older than our houses, and there has been a church on the site for hundreds of years. In the 13th century, one John de Gemilstoun obtained permission from the priory of Whithorn to establish a shrine dedicated to St. Michael at a peaceful location beside the bank of the stream now known as the Dyrock.  In Latin charters, this shrine was described as 'Ecclesia Sancti Michaelis de Gemilston', and the granting of this Church to the prior and canons of Whithorn was confirmed by Robert I in May 1325. That name Dyrock most probably originates from a Gaelic word darach, meaning oak. There would have been, as there still are in places, oak trees growing beside the burn.

It's worth a mention in passing that churches were often dedicated to St Michael, archangel and bonny fighter, on sites that had once been associated with pagan practices. He is particularly loved by the Celts, so who knows what beliefs John de Gemilstoun was hoping to curb in this very beautiful place?

The present Church is believed to be the third on this site, built in 1787 to accommodate 556 worshippers. There's a strikingly beautiful arts and crafts stained glass window by Christopher Whitworth Whall, a lych gate that seems to be older than the church itself and some fascinating ancient tombstones in the quiet graveyard surrounding it. 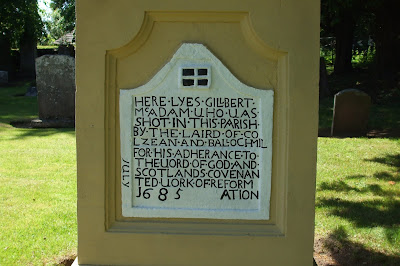 Older inhabitants used to tell us that the present village, with its houses dating, like this one, from the late 1700s and early 1800s, was sited differently from the older village and that many ancient cottages along the Crosshill Road had been demolished years previously, when the 'new' houses were built, circa 1800. This is interesting if true, and we've certainly found plenty of evidence of older recycled masonry in our own 200 year old house.

It suggests that those older, perhaps ancient, houses were deliberately clustered around the foot of the 'big house' - Kirkmichael House. This mansion sits on a natural mound above the village and has a history as one of the strongholds of the great Kennedy family, dating back to mediaeval times - but one or two local place names suggest that it may be even older, a Celtic dwelling of some kind.

So perhaps 200 years ago, the focus of the village shifted from a long association with the big house to a new regard for the kirk, and from the ruling family whose power had waned, to the main road south that ran from Maybole. In doing so, it also went past the Kirkmichael Arms and the McClure Inn that was once a coaching inn with a house called the Stables on the opposite side of the road to this very day.

After all, ale and whisky are as welcome as spiritual sustenance in times of need! 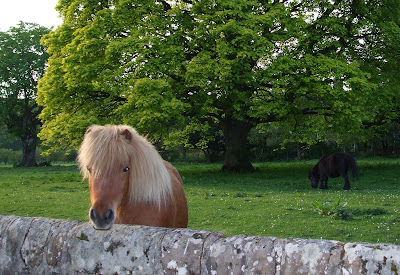 Catherine Czerkawska said…
That's me! And if you look at the static page, which should be somewhere on the right, you can read a bit more about us.
6 August 2019 at 08:22