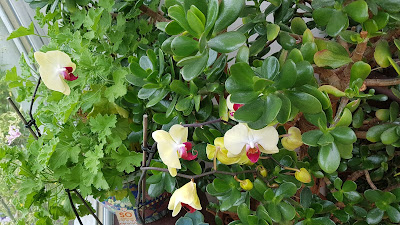 Last week, on BBC R4's Gardeners' Question Time, of all things, one of the experts confessed that he couldn't persuade orchids to flower again. And - the way you do, with radio programmes - I responded to him by saying out loud 'I can!'

Let me say, right from the start, that I have no expertise with orchids at all. I currently have three of them in my conservatory. One, I think, arrived as a very nice gift from somebody, so long ago that I've forgotten who gave it to me. But I remember thinking 'this is so beautiful, but I wonder if I'll be able to keep it alive!' Because although I have green fingers where many plants are concerned, I'm a fairly slapdash gardener, indoors and out. The other two were bought on a whim, in Dobbies on one of their 'clearance' shelves -  the part of the store where they put plants that have fared badly, or are coming to the end of their season, or are otherwise not in good enough condition to be sold at full price.

But they were pretty and cheap and I'm a sucker for a sick plant.

If they were pot bound, I potted them on. I think the first time, I bought orchid compost, but after that, I used what I had: some all purpose stuff. I made sure that the next pot wasn't too big. I bought some orchid feed, and used it when I remembered. I didn't over-water. And I put them in our heated conservatory and hoped for the best. By the way, some friends tell me it isn't a conservatory  - it's an orangerie. But I always associate that word with stately homes, and although this house is older than most, it isn't very stately. So conservatory will do for me. My husband routinely calls it 'the porch' because that's what it used to be before we built this one on. 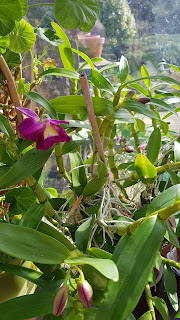 The first one, with a bright magenta flower, sat in solitary splendour, while people admired its flowers and then, of course, the flowers died back. It seemed reasonably healthy, and survived the winter when the conservatory gets very chilly, but isn't ever frosty.

It showed no signs of flowering again for several years. Meanwhile, I had acquired a couple more. And they did exactly the same thing. They flowered, but the flowers died back, and then - nothing. I fed them, I sprayed them with water as recommended online. And nothing happened. Since all three plants seemed reasonably healthy, I was loathe to get rid of them.

Then the magenta orchid started throwing off all kinds of exuberant aerial roots. I repotted it again, on the advice of a friend but there were still no flowers. So I did what I think most indoor gardeners do. I tucked it away among a lot of other stuff, geraniums mostly, but also a money plant, thinking that at least its leaves would look pretty.

One morning, in spring, when I was thinking that I would really have to do one of those periodic sort-outs that you need in a conservatory, cutting things back, repotting if necessary, moving things around a bit - I spotted a glint of pinky purple among the foliage. Because it was springtime, I found myself wondering if I had left a Christmas decoration behind. You know how there's always one that gets away! But when I parted the leaves, I saw to my astonishment, that the orchid was in bright bloom, full of flowers and buds.

Even so, it took me a while to 'twig'. The next orchid, the one at the top of this post, sat in splendid isolation on a windowsill elsewhere in the house, and looked increasingly miserable. I almost (silly me) threw it out. But again, I fed it a bit, tucked it away among a few plants with mature foliage, and watered it when I watered the rest, i.e. not very often. (More house plants are killed by over-watering than anything else.)

The results, you can see at the top of this post  - the orchid recovered and has been flowering merrily for some weeks now. There's another one elsewhere in the conservatory, a gorgeous little stripey orange flower, and it's doing the same thing.

When you think about it, it makes sense. Many of the orchids that we find in our garden centres, or supermarkets, sold as birthday or Mother's Day gifts, come originally from tropical forests. They may be bred in different environments, so that they can be sold to us. But I think they remember their 'roots'. They feel at home among foliage, and don't even mind a little temperature variation, as long as they are in leafy company.

Try it. You may be in for a pleasant surprise!