When I was a little girl, in Leeds, before we moved to Scotland, my best friend was Polish and her mum, Irena Wilk, would bake wonderful Polish cakes at Christmas and Easter. It was my introduction to the notion of sweet yeast cookery, breakfast breads, coffee cakes. I can still remember the mouthwatering scent of continental baking that permeated her little terraced house. My own Irish nana made bread every week, along with big flat 'oven bottom cakes' baked on the bottom of the old range oven, as well as sweetish, flat shortcakes with raisins in them. (Best eaten warm, split, with lots of butter.) She taught me how to bake, how to activate the yeast, how to knead and prove the dough. But Irena's cakes were faintly exotic as well as delicious with a definite hint of Austro Hungarian Empire about them.

Most of them she made using large flat baking trays, into which she would tip the sticky, rich, active dough and then cover the top with sliced apples or halved plums before sprinkling with a little sugar, allowing to rise again and baking in a hottish - but not too hot - oven. Sometimes she would enrich the dough still more, perhaps adding dried fruit, and then bake the cake in a circular, fluted tin, calling the result a 'babka'.

I already knew that word. I had a Polish uncle, entirely unrelated to my Polish dad, and he always jokingly called his wife, my aunt, stara baba - old woman. Babka itself translates as grandmother, but the name of the cake derives from the shape, resembling the traditional long skirts of a little old lady.

Anyway, I still bake babka from time to time. But now that I have a breadmaker, I've been experimenting with mixing the dough in the machine - and it works just fine.

Essentially, follow your breadmaker's recipe for a large loaf. For my model that means four cups of plain flour. Everything else follows on from that. I've found 00 Italian pizza flour, when I can get it, works best of all, but a general, fine milled, all purpose flour is pretty good. Don't use strong bread flour.

Into your breadmaker pan, tip a cup and a half of milk or milk and water, 60 grams of gently melted unsalted butter, two large beaten eggs, a good teaspoon of vanilla essence, a scant half teaspoon of salt, and two tablespoons of caster sugar - more if you have a sweet tooth, which I don't. Finally, add a sachet of instant yeast.

All of the above quantities are open to interpretation and experimentation. You can add a little more butter and a little more sugar if you like. You can add other flavourings too, such as grated lemon peel and a teaspoon of lemon oil. If you want to add some dried fruit, do so at the point advised by your breadmaking programme. Mine beeps at me a little way into the mixing. In Scandinavia, crushed cardamom seeds are often added to sweet yeast cakes and breads - I love the flavour, so again, you could experiment.

Let the machine do its work. It should be a very soft, rich, sticky dough. If it seems just too sticky, you can add a bit more flour, but be careful. You're making cake, not bread, and the crumb should be fine and soft when baked. When the dough programme has finished, tip the risen mixture into your well greased babka tin, and smooth down. It should be sticky, but just firm enough to hold together. If you plan to make apple or plum cake, you can use a flat baking tray, but remember that it will rise, so it needs a certain depths to it. Smooth out with a spatula and cover with thinly sliced apples - any variety - or plums, and sprinkle with sugar before baking.

One other delicious variation involves a crumble mixture, made with a few more tablespoons of plain flour with 50 or 60 grams of cold butter rubbed into it and another couple of tablespoons of sugar. This is pretty much exactly the kind of mixture you make for a fruit crumble. Sprinkle this in a thin layer over the rich dough in the baking pan before baking. Cut into squares when cool.

If you are making a babka, wait until it has started to rise again, and then bake until golden brown and well risen. A skewer should come out clean. I bake it at about 160 celsius for between half an hour and forty minutes, but I have quite a hot oven. Leave it in the tin to cool for a little while, so that it comes out easily - looking like a skirt.

It is best eaten very fresh, but it will keep for several days. Slice it and serve with good coffee for a late breakfast. You can butter it, but that really would be gilding the lily! 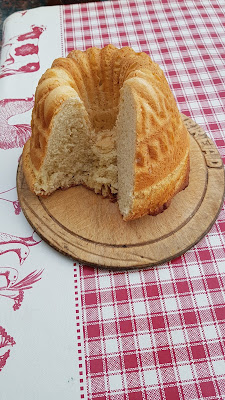 By the way - if you want to read a bit more about my childhood in smoky Leeds, look out for my recent book, A Proper Person to be Detained published by Saraband, in 2019. Although it begins with a murder in my family in 1881, it's about so much more than that, not least, my own Polish heritage via my refugee father.