The Spooky Scottish Inspiration Behind My New Novella: Rewilding.


This post is reblogged, with a few tweaks, from my writer's blog, here.

A question writers are often asked, whenever they stand up in public and talk about their work, is 'Where do you get your ideas from?' The fact is that most of us are never short of ideas. We have ideas coming out of our ears. We spend more than half our lives inside our heads, with characters of our own creating. What we're sometimes short of is the time to write them so we learn to be selective.

Sometimes ideas arrive fully formed, sometimes as a small seed that nags away at you.

All of which is a roundabout way of exploring the inspiration behind my most recent, slightly spooky tale that saw me through the dreich and dreary days of November 2019. I called it Rewilding. And it all began with a book festival.

Actually, it began long before that. Years ago, following my graduation from Edinburgh University with a degree in Mediaeval Studies, I did a postgraduate Masters at Leeds University in Folk Life Studies with Scots folklorist Stewart Sanderson. Both courses resulted in a lifelong interest in folk custom and belief.

Sometimes those interests coincide with my fiction.

Back to the Book Festival. At the very end of October, I'd been invited to speak at the Tarbert Book Festival - Tarbert Loch Fyne that is - and I can recommend it. I've spoken there twice now and hope they invite me back again. Anyway, my talk on my new book, A Proper Person to be Detained, was on Sunday lunchtime. That meant that we could listen to a presentation by one of my fellow Saraband authors, Alan Brown, with his wonderful Overlander book. (Buy it!) I was captivated by his account of 'bikepacking coast to coast across the Scottish Highlands'. But as I listened to him, my fiction writer's imagination was beginning to work overtime, the way fresh yeast starts to bubble and grow when you add a teaspoon of sugar.

I started to imagine a youngish  - but not too young - woman determined to prove her mettle in a small way, for various reasons that emerged as I visualised her. I saw her undertaking a small autumn backpacking expedition through a remote part of the western highlands, sleeping in bothies over some three or four nights, keeping a diary as she went.

From Tarbert, meanwhile, in the real world, we headed north to stay with friends on the Isle of Skye. We were fortunate to have chosen one of the finest weeks of the year. The sun shone day after day and although it was chilly, the frosts only served to enhance the scenery. We were seeing the Highlands and then Skye itself, in all their terrible beauty.

There is nowhere as beautiful as Scotland. Nor, sometimes, as daunting.

Among the places I visited, was a broch: Dun Beag. My artist husband has serious mobility problems, so he stayed in the car while I laboured up the hill to bag what is fondly referred to by my family as 'another of mum's heaps of old stones'. As I did so, I thought again about my fictional woman, and about myself at that age, mid thirties perhaps. I had done quite a bit of travelling and considered myself to be competent and unafraid. I started to project myself back into that situation, the solo hiker, in what is essentially a very safe part of the world. And then I started to think about fear, irrational fear maybe, but fear all the same, and why it might happen. Fear of the dark. Fear of strangers. Fear of silence. Because some places are scary and you have no idea why that might be.


When we came back, I started to write. Somewhere along the way, I recollected my own play, produced at Glasgow's Oran Mor venue a few years ago. The Secret Commonwealth, directed by Jen Hainey, with Liam Brennan as Robert Kirk, was a play about the 17th century Gaelic speaking minister of Aberfoyle who wrote a treatise of that name, all about the dangerous supernatural world, the 'commonwealth of the fairies'. Kirk was believed to have been carried away by them as a retaliation for revealing their secrets. When that play was produced, the talented Celine Donoghue did the music. She had studied the songs and melodies that were associated with the sidhe of the Celts, fairies for sure, but nothing like the small, twee creatures of Victorian imagination - and dangerous when crossed. Creatures neither of heaven nor of earth, but of somewhere in between.

Along the way, I refreshed my memory about the belief in the water horse, the each uisge. Not the reasonably friendly kelpie, but a much more challenging creature altogether.

Finally, I came upon a song, collected and sung by the incomparable Julie Fowlis, a heart rending song that - unusually - gives voice to the each uisge, the dangerous water horse himself.

I wrote throughout the month of November, while I listened to the song obsessively. The story took its course, as such things will. I wrote to find out. I always write to find out. If I know the whole story before I begin, I tend to get bored and give up. 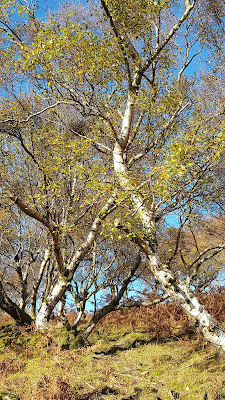 By the end of that time, I had a short novella or a long short story, some 17,000 words, which I called Rewilding. My good friend read it and at first remarked that it was a love story. Which it is. No doubt about that.

Then, she messaged me the following day to say that she had woken up in the night, disturbed by it, wondering what was really happening, worried by it.

That too was just the kind of response I wanted. It's not a story that I can place anywhere traditional with any certainty or speed. It's on Kindle. I'll turn it into a small paperback as well, for those who don't much like eBooks, but I've reread it a few times in the dark, and I think it works. Especially in the dark, now that I come to think of it. Each time, it both frightens me and entices me.

I wonder if it will do the same thing to you. The question you have to ask yourself at the end is, what would you have done, in her shoes? Because I know what I'd have done. Do you?

I'm already thinking that there might be more to the story. At least one more novella is beginning to ferment away.

Oh and by the way - if this song doesn't send shivers down your spine, I don't know what will.
Celts faery fiction Folklore ghosts kelpie magic myth and legend Novella Scotland Skye water horse