February 09, 2020
One of the main challenges for self employed freelancers like myself, as a writer, and my artist husband, Alan Lees, lies in time management and the pressing need to do some form of promotion. I often find myself regretting that the internet had barely got started back when my husband was making and also restoring wonderful, sculptural, rocking horses and other large and lovely woodcarvings. 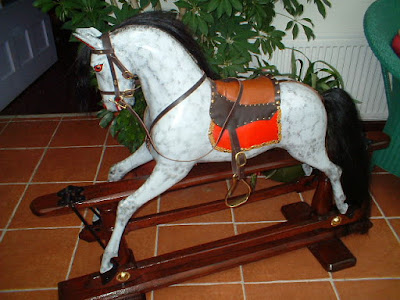 We did numerous shows with them, in Scotland and the north of England back in the 1980s and 90s. We took out ads in magazines, and generally exhausted ourselves with lugging ultra heavy hardwood sculptures in and out of a Transit van - but it strikes me now that even a few hours on Facebook or Instagram or Pinterest would have resulted in more sales for less physical effort, a physical effort that was, for Alan at least, over and above the intense effort involved in actually making the horses themselves!

The challenges can best be illustrated by an encounter at one large craft or interiors fair. We did so many that I can't remember which one now, but think it might have been a local flower show. There we were, Alan in full old fashioned woodcarver costume, with a wooden horse head locked into a vice, working away, carving tool in hand, surrounded by wood shavings and sawdust, with several wonderful wooden horses carefully positioned around him, as well as albums of pictures of previous work, leaflets, and a large notice with his name on it. A man sauntered along, stood and watched him for a while, took in the whole (expensive) stand, gazed at him for another five minutes, and said 'Who makes the horses then?' 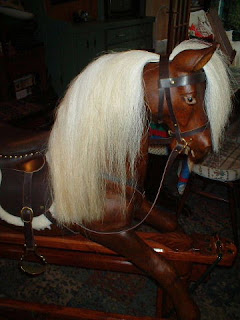 I always think that had the internet been at our disposal when Alan was in his woodcarving prime - and back then he was acknowledged as one of Scotland's foremost woodcarvers - he would have managed to make a more realistic income. As it was, the onset of serious arthritis meant that he had to abandon carving in favour of painting. But the change has been difficult to manage, especially when fatigue besets him.

He sits and paints every day and creates some fine 'naive' artworks - but the energy involved in promoting as well as producing is challenging, especially when I'm occupied with the demands of a writing career and this old house into the bargain. 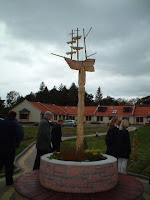 Alan produced some beautiful work back then, but I don't think he has ever had enough credit for his talent, perhaps because wood - unless it is properly treated and cared for - doesn't have the longevity of stone or bronze. His paintings are less ephemeral, although the challenges now are all to do with working in an overcrowded field, switching from one medium to another and producing work that is not in an way conventional.

A few years ago, I phoned one of the Glasgow auction houses that runs a regular Scottish art sale, to see whether they would be willing to include one or two of Alan's pictures like the one at the top of this post, (sold last year, although prints are available) or the one below. I have seldom met with a more snobbish and repellent response in my entire working life, and we writers tend to have thick skins, because we need them!

You'd have thought I'd offered the young man a plastic toadstool - or an insult.

Now, I've set up an Etsy Store, also called the 200 Year Old House. I plan to populate it with more of Alan's work as the year progresses. Because we know that it's good to be able to see artworks before buying, we're thinking about holding two or three open days, so that people can come to his studio. And although we don't have a shop, people are always welcome to come and view by arrangement. Let me know what you think.