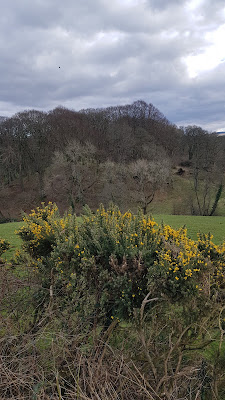 We have jackdaws on all our roofs in this village - but also rooks living nearby. There's a large rookery, not a million miles from where this picture was taken, but we get some of the overspill in the big tree over the fence at the bottom of the garden.

One of the (few) advantages of being more or less confined to house and garden, with a wholly empty calendar, is the time to stand and stare, usually out of the window. And today, something intriguing happened.

I had popped a croissant in the oven this morning, mostly because it needed eating and we're not wasting any food at all if we can help it. Not that we do, really, but it's even more vital when you don't know when you can get to the shops.

Anyway, something intervened and I forgot all about it, with the result that it wasn't exactly charcoal, but was definitely too hard and brown to eat. So I waited until it had cooled and put it out for the birds, crumbling most of it up, but leaving a few larger pieces.

When I looked out a few moments later, the biggest rook was - as he or she always is - in possession of the bird table, while the smaller birds, even the jackdaws, stood back at a respectful distance, so that the boss could take her pick of the best morsels. So far so normal.

But what happened next was fascinating.

She filled her beak with a few flakes of quite dry croissant and I thought that she might be going to fly away with them. In fact I wondered if she was feeding young, which may well be the case. But she hopped down from the bird table, and walked purposefully the few yards to where I had just filled the little bird bath with fresh water. Then she hopped up onto the side of the bath, and proceeded to put the flakes into the water, giving them time to soften, before carefully hoovering them up again and swallowing them, repeating this until all were gone. Effectively dunking them. Only then did she fly away. Possibly to regurgitate for her young, or possibly - since it is quite early - to sit somewhere to digest her meal.

Either way, it was fascinating - and I'm sorry there are no pictures, but if I had opened the door she would have taken fright and I was too busy watching her.

alison333 said…
That's amazing. So smart, reminds me of my crow....the one who used to visit me every day a few years ago. 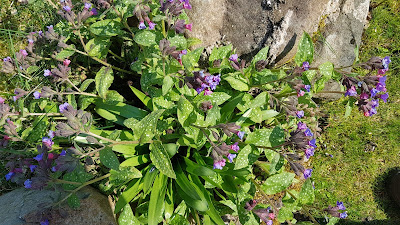 Bee Friendly Gardening - A Handful of Hints and Tips

I'm grateful to a couple of people on a Facebook group called Save the Bees for inspiring this post. They were asking about making gardens bee friendly and although plants will vary depending upon where in the world you live, there will be some constants. So I think it's worth my while sharing a bit of my own experience.

Please note that I'm not a botanist, and I'm not a bee expert although I have friends who are, and right now there's a pot of delicious local honey sitting in my kitchen cupboard. I'm a casual gardener. With a fairly big cottage garden to maintain, I like to keep things as wildlife-friendly and as easy to manage as possible. That means not being too keen on everything being tidy and well manicured, which is probably just as well in my case!

Here are a few plant suggestions:

Pulmonaria or lungwort (above) is an early flowering plant that the bees love, in this garden at least. The plants grow quite large, and you can split them in the autumn and…

A Bit About Bread - A Variable Recipe!

NB this is not a precise recipe. If things are in short supply, you'll just have to experiment!

If you can source plain or self raising flour or bread flour (in an emergency you can use any of these) and baking powder  - and some milk and /or natural yoghurt - then you're all set. You can add an egg or two, but you don't have to. Ditto a little butter or marge. If you can find dried raisins, sultanas or any mixture of them, so much the better. But again not essential.

My nana used to make something she called Irish teacake, and many years later, when I was working as a temporary nanny in West Cork, the farmer's wife from whom the family were renting their holiday accommodation made something similar that she called… 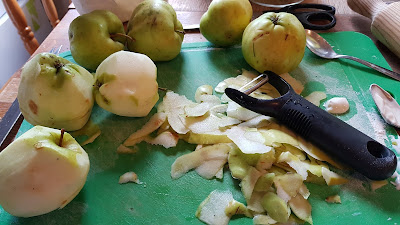 Apples With Everything: Apple Scones

This is a very good village for apples - and this has been a very good year for apples as well. For a while, visitors were not allowed to leave our house without a bag of apples. Friends have been making jams and chutneys. We've cooked and eaten lots of them ourselves and frozen some of them too.

The tree at the bottom of our 200 year old garden is called Golden Noble, a very old variety. These are cooking apples, but they are sweet enough not to need much sugar, and when cooked, the fruit is soft, fluffy, juicy and very 'old fashioned'.

Every year, I make batches of apple scones, and they are the easiest things in the world to bake. Here's how to do it.

I make a basic scone dough, (these are called biscuits in the USA, I believe!) with about a quarter of a kilo - approximately eight ounces in old measures, or even eight heaped tablespoons - of self raising flour, a well heaped teaspoon of baking powder and a half teaspoon of salt, all sifted together. If you only hav…