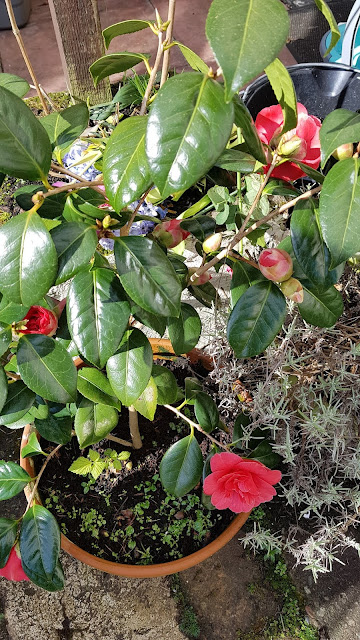 A friend who moved away last year, (we miss her a lot) gave me this plant before she left. I have spent the months in between thinking that it was a rhododendron. Which - as anyone who knows about plants will already have noticed - it isn't! It's a camellia and a very pretty one.

Because it was already getting very chilly when our friend moved away, I hauled the plant through the house and left it sitting quite close to the house, which is where it still is. We have an interesting situation with our garden. It is south facing and sunny and to some extent has a micro-climate. That, coupled with very rich soil, the result of two hundred years of cultivation and presumably manuring, means that the garden is very fertile. But acid loving plants like rhodies and camellias don't like it at all. They do very well in pots though.

This is belied by the amazing magnolia stellata that we have, that seems to flourish and grow more beautiful every year. (More of this in another post.) On the other hand, the magnolia is planted in one of the parts of the garden where the soil is a lot less rich, and besides, I'm told they aren't as sensitive as some other varieties.

Not that I'm in any way an expert in any of this. I tend to 'fly by the seat of my pants' where gardening is concerned!

The poor little camellia, flowering bravely and boldly in Scotland in March, took a bit of a hit the night before last, when a heavy ground frost descended - and even today, with the sun shining, there's a lazy wind that prefers to go through rather than around you. All the same, it seems to have recovered well and is still looking very bonny.

Vibrant flowers like this certainly raise the spirits in difficult times. Meanwhile, here's another thing to raise your spirits. There's a connection with camellias, of course. But what's more important is the sheer incomparable beauty of the voice.
200 year old garden camellia container gardening cottage garden